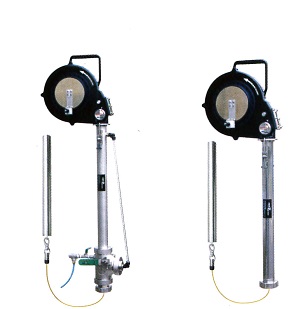 Oil/water Interface Detector
Tankers shall be provided with an effective oil/water interface detectors approved by the Administration. This device shall be provided for a rapid and accurate determination of the oil/water interface in slop tanks and shall be available for use in other tanks where the separation of oil and water is effected and from which it is intended to discharge effluent direct to the sea. This device should be tested according to the IMO Resolution MEPC 5, (XIII) for the prevention of pollution from ships.

Cargo Liquid Sampling Device
This device is used for collecting sample of oil, storaged in oil tank. The T2000-TSS series Sampling Device is designed for gauging the height of liquid level, measuring the depth of water on the bottom of the tank and collecting sample of liquids, being stored in the tank without pressure relieving from the tank. It makes prevent the loss of valuable vapor from tank. And protect operator from excessive poisonous vapor.

Tank Bottom Liquid and Sediments Checking Device
After cleaning inside cargo tank, this device is being used for checking the dryness of the cargo tank bottom. The IMO requirements on tanker safety and pollution prevention, 1978-Resolution A. 446(XI), 4.4.4 ; means such as level gauges, hand dipping, an stripping system
performance gauges as referred to in paragraph 4.4.8 shall be provided for checking that the bottoms of cargo tanks are dry after the crude oil washing. Suitable arrangements for hand dipping must be provided at the after-most portion of a cargo tank and in three other suitable locations unless other approved means are fitted for efficiently ascertaining that the bottom of every cargo tank is dry.

For more information on the page: Tanktech UTI's?
Or request a service or calibration? Please contact Ravebo Marine Service department.
+31(0)181 419 419