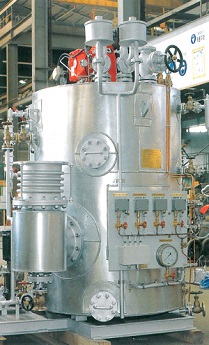 In general there are two different types of boiler that are utilized on board of merchant vessels.

Early watertube boilers used a single drum. Headers were connected to the drum by short, bent pipes with straight tubes between the headers. The hot gases from the furnace passed over the tubes, often in a single pass.

In later developments the bent tube system was designed. This boiler has two drums, an integral furnace and is commonly known as the 'D' type because of its shape . The furnace box is positioned at the side of the two drums and is surrounded on all sides by walls of tubes. These waterwall tubes are connected either to upper and lower headers or a lower header and the steam drum. Upper headers are connected by return tubes to the steam drum. Between the steam drum and the smaller water drum below, large numbers of smaller-diameter generating tubes are fitted. These provide the main heat transfer surfaces for steam generation. Large-bore pipes or downcomers are fitted between the steam and water drum to ensure a good natural circulation of the water.

The need for a wider range of superheated steam temperature control has led to the design of other boiler arrangements. The original External Superheater 'D' (ESD) type of boiler used a primary and secondary superheater which is positioned after the main generating tube bank.

The later ESD II type boiler was similar in construction to the ESD I but uses a control unit (an additional economiser) between the primary and secondary superheaters. Linked dampers direct the hot gasses over the control unit or the superheater depending upon the superheat temperature required. The control unit provides a bypass path for the gasses when low temperature superheating was required. In the ESD III boiler the burners are positioned in the furnace roof. This provides a long flame path and even heat transfer throughout the furnace.

For more information on the page: Kangrim Boilers?
Or request a service or calibration? Please contact Ravebo Marine Service department.
+31(0)181 419 419