Fig. 1 Separation of oil and water
THE GRS-TYPE 15PPM Bilge Separator separates oil and water by difference of their specific gravity. The oily water is commenced to be separated when passing 4-way distributing device, and the floated and accumulated oil are collecting into the upper part of 1st chamber of the 1st vessel and also the remains including minute oil particles of oily water passes through the pall ring & Urethane Coalescer equipped in the 2nd chamber of the 1st vessel. During this process, the size of oily particle become great and floating speed of the particles are increased, thus the oil floats easily. As the emulsified oil is removed by Coalescer equipped in the 3rd chamber of the 1st vessel and 2nd vessel (Emulsion Treatment Unit) and then water is discharged under the condition of blow 15PPM (or 5PPM) of oil density. 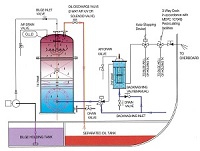 Fig. 2 Oil discharge
When the collected oil in the upper part of the 1st chamber is detected by the Oil Level Detector, the oil discharging valve is opened and then oil is discharged automatically by the Backwashing system. 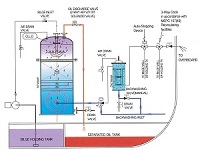 When the Oil Level Detector detects oil, the bilge pump is stopped and the oil discharge valve is opened and direction of 3-way Backwashing valve is changed for backwashing at the same time. The coalescer filter in the 3rd chamber and Pallnng & Urethane Coalescer in the 2nd chamber are cleaned by backwashing water automatically, and the floating objects with oil are discharged.

[2nd vessel (Emulsion Treatment Unit)]
The emulsified oil is removed by the Coalescer and the equipment is cleaned by backwashing after opening the Air vent valve with manual Backwashing valve, thus the performance and efficiency of the system are improved.